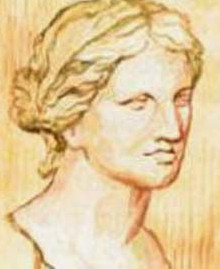 Main achievements: Works on the theorems of the Golden Mean and the Golden Rectangle

Theano of Crotone is the name given to perhaps two Pythagorean philosophers. She has been called the pupil, daughter and wife of Pythagoras, although others made her the wife of Brontinus. Her place of birth and the identity of her father are just as uncertain, leading some authors to suggest that there was more than one person whose details have become merged (these are sometimes referred to as Theano I and Theano II). A few fragments and letters ascribed to her have survived which are of uncertain authorship.

Theano not only worked in the areas of physics, medicine and child psychology, but was an astronomer/mathematician in her own right. Her work on the theorem of the Golden Mean (still in use today) and the corresponding Golden Rectangle are considered to be her most important contribution [Reference: "The Hidden Giants" by Sethanne Howard].

The writings attributed to Theano were: Pythagorean Apophthegms, Female Advice, On Virtue, On Piety, On Pythagoras, Philosophical Commentaries, and Letters. None of these writings have survived except a few fragments and letters of uncertain authorship. Attempts have been made to assign some of these fragments and letters to the original Theano (Theano I) and some to a later Theano (Theano II), but it is likely that they are all pseudonymous fictions of later writers, which attempt to apply Pythagorean philosophy to a woman's life. The surviving fragment of On Piety concerns a Pythagorean analogy between numbers and objects; the various surviving letters deal with domestic concerns: how a woman should bring up children, how she should treat servants, and how she should behave virtuously towards her husband.

According to Thesleff, Stobaeus, and Heeren, Theano wrote in On Piety: "I have learned that many of the Greeks believe Pythagoras said all things are generated from number. The very assertion poses a difficulty: How can things which do not exist even be conceived to generate? But he did not say that all things come to be from number; rather, in accordance with number - on the grounds that order in the primary sense is in number and it is by participation in order that a first and a second and the rest sequentially are assigned to things which are counted."