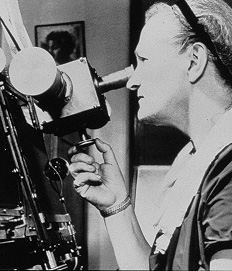 Main achievements: Explanation of spectra of Sun. More than 3,000,000 observations of variable stars.

Cecilia Helena Payne-Gaposchkin was a British–American astronomer and astrophysicist who, in 1925, proposed in her Ph.D. thesis an explanation for the composition of stars in terms of the relative abundances of hydrogen and helium.

Cecilia Helena Payne was one of three children born in Wendover, England, to Emma Leonora Helena and Edward John Payne, a London barrister, historian and accomplished musician. Her mother came from a Prussian family and had two distinguished uncles, historian Georg Heinrich Pertz and the Swedenborgian writer James John Garth Wilkinson. Cecilia Payne's father died when she was four years old, forcing her mother to raise the family on her own.

She attended St Paul's Girls' School. In 1919, she won a scholarship to Newnham College, Cambridge University, where she read botany, physics, and chemistry. Here, she attended a lecture by Arthur Eddington on his 1919 expedition to the island of Principe in the Gulf of Guinea off the west coast of Africa to observe and photograph the stars near a solar eclipse as a test of Einstein's general theory of relativity. This sparked her interest in astronomy. She said of the lecture, "The result was a complete transformation of my world picture. My world had been so shaken that I experienced something very like a nervous breakdown." She completed her studies, but was not awarded a degree because of her sex; Cambridge did not grant degrees to women until 1948.

Payne realized that her only career option in the U.K. was to become a teacher, so she looked for grants that would enable her to move to the United States. After being introduced to Harlow Shapley, the Director of the Harvard College Observatory, who had just begun a graduate program in astronomy, she left England in 1923. This was made possible by a fellowship to encourage women to study at the observatory. The first student on the fellowship was Adelaide Ames (1922) and the second was Payne.

Shapley persuaded Payne to write a doctoral dissertation, and so in 1925 she became the first person to earn a Ph.D. in astronomy from Radcliffe College (now part of Harvard). Her thesis was "Stellar Atmospheres, A Contribution to the Observational Study of High Temperature in the Reversing Layers of Stars". Astronomers Otto Struve and Velta Zeberg called it "undoubtedly the most brilliant Ph.D. thesis ever written in astronomy".

Payne was able to accurately relate the spectral classes of stars to their actual temperatures by applying the ionization theory developed by Indian physicist Meghnad Saha. She showed that the great variation in stellar absorption lines was due to differing amounts of ionization at different temperatures, not to different amounts of elements. She found that silicon, carbon, and other common metals seen in the Sun's spectrum were present in about the same relative amounts as on Earth, in agreement with the accepted belief of the time, which held that the stars had approximately the same elemental composition as the Earth. However, she found that helium and particularly hydrogen were vastly more abundant (for hydrogen, by a factor of about one million). Thus, her thesis established that hydrogen was the overwhelming constituent of the stars (see Metallicity), and accordingly was the most abundant element in the Universe.

When Payne's dissertation was reviewed, astronomer Henry Norris Russell dissuaded her from presenting her conclusion that the composition of the Sun was predominantly hydrogen and thus very different from that of the Earth, as it contradicted the accepted wisdom at the time. She consequently described the result in her thesis as "spurious". However, Russell changed his mind four years later after having derived the same result by different means and publishing it. Although he acknowledged her work briefly in his paper, Russell was nevertheless often given credit for the discovery even after Payne's work was accepted.

After her doctorate, Payne studied stars of high luminosity in order to understand the structure of the Milky Way. Later she surveyed all the stars brighter than the tenth magnitude. She then studied variable stars, making over 1,250,000 observations with her assistants. This work later was extended to the Magellanic Clouds, adding a further 2,000,000 observations of variable stars. These data were used to determine the paths of stellar evolution. She published her conclusions in her second book, Stars of High Luminosity (1930). Her observations and analysis, with her husband, Sergei Gaposchkin, of variable stars laid the basis for all subsequent work on them.

Payne-Gaposchkin remained scientifically active throughout her life, spending her entire academic career at Harvard. At first, she had no official position, merely serving as a technical assistant to Shapley from 1927 to 1938. At one point she considered leaving Harvard because of her low status and poor salary. However, Shapley made efforts to improve her position, and in 1938 she was given the title of "Astronomer". She later asked to have this title changed to Phillips Astronomer. She was elected a Fellow of the American Academy of Arts and Sciences in 1943. None of the courses she taught at Harvard were recorded in the catalogue until 1945.

When Donald Menzel became Director of the Harvard College Observatory in 1954, he tried to improve her appointment, and in 1956 she became the first woman to be promoted to full professor from within the faculty at Harvard's Faculty of Arts and Sciences. Later, with her appointment to the Chair of the Department of Astronomy, she also became the first woman to head a department at Harvard. Her students included Helen Sawyer Hogg, Joseph Ashbrook, Frank Drake and Paul W. Hodge, who all made important contributions to astronomy. She also supervised Frank Kameny, who became a prominent advocate of gay rights.

Payne-Gaposchkin retired from active teaching in 1966 and was subsequently appointed Emeritus Professor of Harvard. She continued her research as a member of staff at the Smithsonian Astrophysical Observatory, and edited the journals and books published by Harvard Observatory for twenty years.

According to G. Kass-Simon and Patricia Farnes, Payne's career marked a turning point at Harvard College Observatory. Under the direction of Harlow Shapley and Dr E. J. Sheridan (whom Payne-Gaposchkin described as a mentor), the observatory had already offered more opportunities in astronomy to women than did other institutions, and notable achievements had been made earlier in the century by Williamina Fleming, Antonia Maury, Annie Jump Cannon, and Henrietta Swan Leavitt. However, with Payne-Gaposchkin's Ph.D., women entered the 'mainstream'.

The trail she blazed into the largely male-dominated scientific community was an inspiration to many. For example, she became a role model for noted astrophysicist Joan Feynman. Feynman's mother and grandmother had dissuaded her from pursuing science, since they believed women were not physically capable of understanding scientific concepts. But Feynman was later inspired by Payne-Gaposchkin when she came across some of her work in an astronomy textbook. Seeing Payne-Gaposchkin's research published in this way convinced Feynman that she could, in fact, follow her scientific passions.