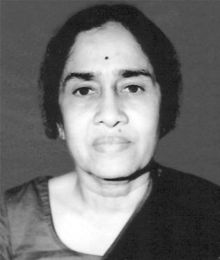 Main achievements: First Indian woman to get a Ph.D in a scientific discipline in a British university.

Kamala Sohonie (née Bhagvat) was an Indian biochemist. She was the first Indian woman to get a Ph.D in a scientific discipline.

Kamala Sohonie was born in 1912 in Indore, Madhya Pradesh, India. Her father, Narayanarao Bhagvat, was a chemist. Kamala graduated in 1933 with a B.Sc degree in chemistry (principal) and physics (subsidiary) from Bombay University. She then applied to the Indian Institute of Science for a research fellowship, but her application was turned down by the then Director Prof. C V Raman on the grounds that women were not competent enough to pursue research. After some persuasion, she was granted admission at the IISc, the first woman to be admitted, on the condition that she would be on probation during the first year of her research. While Kamala Bhagvat was not the first Indian woman to get a PhD in the sciences- E.K.Janaki Amma (who became Director General of the Botanical Survey of India) got her PhD in 1930 while Kamala Bhagvat got her degree in the late 30s. However, she was the first Indian woman to get a PhD in the sciences at a British university.

Kamala agreed to Prof. C.V Raman's conditions and started to work at IISc in 1933. Her mentor was Sri. Srinivasayya. Prof. Raman was impressed by her performance and gave her permission to pursue further research. She worked on proteins present in food items, and the research earned her an M.Sc degree in biochemistry. She was invited to Cambridge University to work under Dr. Derek Richter in the Frederick G. Hopkins laboratory. She then worked under Dr. Robin Hill, and discovered the cellular enzyme cytochrome. She earned a PhD degree from the Cambridge University for her studies on cytochrome c. Her research findings were very short, which consisted of only 40 pages. She returned to India in 1939. She was appointed as the Professor and Head of biochemistry department at Lady Hardinge Medical College in New Delhi. Later, she worked at the Nutrition Research Lab, Koonoor. After marrying Mr. M.V Sohonie in 1947, she moved to Mumbai. She joined the Royal Institute of Science in Bombay as the professor of biochemistry department. At the institute, she worked on the nutritional aspect of legumes. She was presented with the Rashtrapati Award for her work on the drink 'Neera' which is an important food for malnourished children.

Kamala Sohonie collapsed and died shortly after being honored in a ceremony organized by the Indian Council of Medical Research in New Delhi.