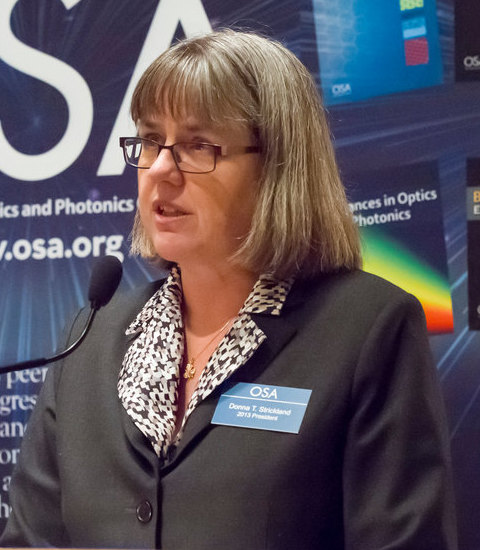 Donna Strickland is a Canadian associate professor who is a pioneer in the field of lasers. She is the third woman to win the Nobel Prize in Physics after Marie Curie and Maria Goeppert-Mayer. She won the prize for the work she did as a PhD student. The technique she developed with her PhD advisor, Gérard Mourou, called chirped pulse amplification, is used for producing ultrashort pulses of very high intensity, useful in laser micromachining, surgery, medicine, and in fundamental science studies.

Strickland graduated with a B.Eng in Engineering Physics from McMaster University and obtained her PhD in Optics Physics at the University of Rochester in 1989.

Strickland is an associate professor at the University of Waterloo, where she leads an ultrafast laser group that develops high-intensity laser systems for nonlinear optics investigations. On 2 October 2018, Strickland was awarded the Nobel Prize in Physics for her work on chirped pulse amplification with Gérard Mourou, who was her PhD supervisor. Her pioneering work on the "Compression of amplified chirped optical pulses" was published in 1985, and led to the development of the field of high intensity, ultrashort pulses of light beams. Strickland's recent work has focused on pushing the boundaries of ultrafast optical science to new wavelength ranges such as the mid-infrared and the ultraviolet, using techniques such as two-color or multi-frequency techniques, as well as Raman generation. She is also working on the role of high power lasers in the microcrystalline lens of the human eye, during the process of micromachining of the eye lens to cure presbyopia.

In her professional capacity, she has served as the vice-president (2011) and the president (2013) of the Optical Society, and was a topical editor of the journal Optics Letters from 2004 to 2010.